There’s a big wide wonderful world out there. It may not seem so at the moment, but when we crawl out of our caves it will be there waiting for us.

Since my daughter is a caregiver in an assistant-living facility, I see how small some people’s lives can become. They are sequestered away with the television as their keeper. They once had a life, family, children, good heavens, the lady she is caring for (I’ll call her Marie) escaped Germany as a child aboard the Kinder Transport. (Somehow, the Nazi’s let some of the children escape while keeping their parents.) Unlike Dr. Ruth (the sex therapist), who also escaped aboard the Kinder Transport, and whose parents were killed, Marie’s parents escaped Germany later on.

Marie went on to become an expert mathematician, even becoming a co-maker of a theorem.

Now her life is the news, and body count. She thinks news will be fresh at the top of the hour. The trouble is, it’s the same news as the bottom of the hour. It is driving my daughter nuts.

I have heard that if we don’t work on ourselves, we become worse. they used to call it, “Set in your ways.” Without input, people can become depressed or melancholy. (There’s a pill for that.) Remember the old song Old Man River, “We’re tired of livin’, but fear’ed of dyin’?”

We’ll get through this current pandemic. We haven’t had to escape the Nazi’s or be shipped away from our parents. We just need to take care of ourselves and our families. This is a time to re-think our lives and priorities, and if you’re like me, give some thought to how it all works—you know, not what our parents told us, or our schools, but what we really think, down deep.

Who are we as people?

I’ve heard that one way to seduce a nation is to make it so nobody can come to a sensible conclusion. Well, we’re sort-of there. We can have beliefs and ideas about what is happening. We can listen to one side or the other, but it appears we can’t really know what’s going on. So, we do what we are told. We cover our faces and stay away from people and close our businesses, or we get laid off and wonder what is the world is happening.

Once upon a time, I came up with the idea that it depends upon which window we’re looking through. Out one window, you see the birds chirping, the sun shining, and flowers in full bloom. Look out the window that opens to the back yard, and you see that clouds have obscured the sun, and people are fighting.

I guess it all is.

My daughter and I have found a fantastic way to have adventures without going anywhere, and to write a book in the process. We are two archeologists, young women in 1920, on the hunt for the mystery of three gold coins. These three coins together are a map to a treasure. The trouble is, finding the coins. We become separated from each other, and thus we are communicating through letters. She sent me to Peru, where I found, upon landing in Lima, that it was a booming metropolis, with shops, restaurants, theater, museums, and fine hotels. In the 1920’s it was frequented by the likes of Greta Garbo and Ernest Hemingway, and people rich enough to be gold coin collectors.

(Good old Google research.) One thing about a dictator, he can get things done, and President Augusto Leguia decided to transform Lima into a cosmopolitan city, not unlike some found in Europe. The streets crisscrossed using Parisian design, and many of the buildings copied ones you might find in Paris.

I found I could use a telephone, and they did have limited air travel in 1920. Generally, however, people traveling long distances did so on ships. Lima today isn’t that of the ’20s and ’30s, for earthquakes, war, and politics have interfered.

When daughter’s bush plane crashed in the Amazon jungle on her way to meet me, natives applied the scrapings of a frog’s skin to her wounds. (They tie the frog’s four legs together, causing the stressed frog to secrete a fluid on his skin. That fluid is then scraped off and applied to burns or injuries. This treatment, she said, was to purge her of all negativity, and it caused her to purge all stomach contents as well.

“Well,” she wrote, “ if throwing up is a spiritual experience, next time, I’ll just go to New York and eat Coney Island Red Hots until I puke. Why not save the frog the humiliation?”

Excerpt from #6: The seeker has found her guide.

“You have a point. Are you a kahuna?”

“Yes. Keeper of the sacred word.”

“What is the sacred word?”

“It’s what I am endeavoring to teach you. It isn’t written on some scrolls somewhere by someone more learned than you. It resides in your own being. Listen to it. You let yourself be thrown off-kilter. You know better, but you still do it.”

“I’m not without nerves. I am a physical being. I want to be calm, but sometimes I want to yell out of pure frustration.”

“Sure, why did the great divine give you emotions if not to use them. You suppress them because you know it upsets others. Leave others to their own doing.”

“Wow. You’re something else.”

“Yeah, it takes something else to be sightless and to live in the jungle. Come, I want to show you something.” 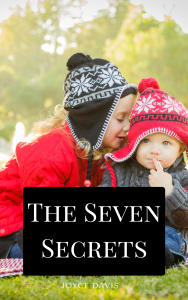